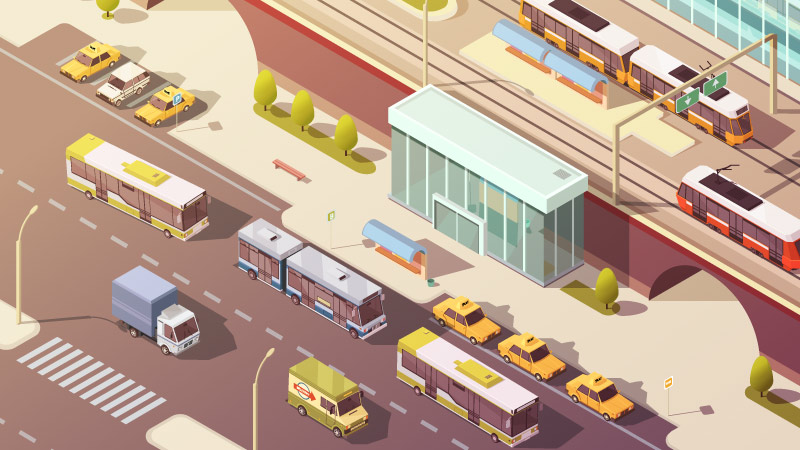 Ridesharing industries are redefining the means of transportation for years. The success of objective aimed at facilitating the customers by providing ride at one’s doorstep brought huge fortunes for companies. Transportation industry trends for the current year indicate that the upcoming developments will further strengthen ridesharing industry.

Transportation industry in 2019 is mainly focused on introducing the variety in types of vehicles. Companies aim to entirely replace the existing vehicle types with autonomous and hybrid vehicles. Bike taxi is making massive gains in all parts of the inhabited world. However, paratransit is the area where most transport entrepreneurs are taking a significant interest.

Paratransit currently serves as the bridge between public transit and ridesharing systems. It boosts the element of inclusiveness so that every section of society may acquire decent transportation. For instance, paratransit is the top solution for disabled individuals and people trying to create a balance between time and cost.

Furthermore, analysts also forecast that paratransit will fuse distinct industries of ridesharing and public transport into one. Consequently, a passenger will be able to book a bus and a taxi from same mobile app. In an era where transportation industry is striving to facilitate travelers as much as it can,

For over half a century, the manufacturers are trying to enable autonomy in vehicles. The degree of “self-driving” varies considering the expert opinion of previous decades. In the last two decades of past century, researchers failed to achieve a breakthrough in AI. Consequently, the pace of research in AI significantly reduced.

The turn of millennium brought a landmark achievement by the development of efficient machine learning algorithms. Besides, the parallel developments in computer vision also enabled the manufacturers to classify objects from a considerable range and with impressive accuracy. Since the limits of autonomy keep expanding with innovations, the analysts have defined various levels of autonomy.

As a standard, researchers consider automatic transmission systems as the first level of autonomy in vehicles. The two subsequent levels include cruise control and limited self-driving. This limited autonomy at level-three also includes maneuverability and speed adjustment.

Level-four autonomy is the focus of transportation as the transportation industry trends 2019 suggest. Waymo already kicked off level-four autonomous ridesharing cars in Arizona at the end of 2018. Many existing ridesharing companies and emerging startups will follow in the footsteps of Alphabet Inc. to incorporate autonomous cars. With such a degree of autonomy, a vehicle is entirely capable of decision-making under all circumstances. However, Waymo keeps a driver only to intervene in extremely unusual situations.

Entirely driverless vehicles may not be the last level of autonomy – unlike widespread belief. The understanding of customer behavior will enable the manufacturers to customize the car’s environment as per passengers’ wishes.

Shoot with a Scooter

With excessive traffic, regulators are facing a tough challenge of streamlining the traffic – notably, during peak hours. Many industrialists consider scooter as an appropriate alternative. The scooters remained the first choice of courier delivery companies which are now transforming to adopt drones. However, drones are highly unlikely to start commercial ridesharing operations before 2023. Thus, transformation toward scooter is sustainable development.

The scooter services introduced by some transportation giants managed to sustain despite strong opposition from various segments of society. One of the primary concerns of critics is the absence of dedicated bike lanes. These bikes manage to drift between cars and trucks, but often slow down the traffic.

Nevertheless, bike-taxi service will flourish because it facilitates users. Some of the metropolitan administrations in the US are arranging to regulate bike traffic by allocating fixed lanes. The regulations will not only assist administration but passengers and service providers too.

North America and Western Europe are leading with activities for preserving biodiversity. Environmental protection is becoming part and parcel of corporate laws. Administrations encourage businesses, often sponsor the ones, which travel extra miles for maintaining ecosystem.

The transformation toward electric vehicles is attaining a remarkable pace. Travel and transportation industry trends highlight that the major ridesharing and commuting firms in developed world are aiming to adopt electric vehicles completely. In developing nations, the under-availability of electric cars and poor legislative framework allow companies to continue with same thermal vehicles.

The rapidly growing competition is pushing ridesharing companies to introduce electric vehicles before rivals. Passengers also want quick transformation toward electric cars. A survey indicates that up to 85% of passengers can tolerate slight delays in return of environment protection through electric vehicles.

Toyota’s one billion dollar investment in Grab is intended to introduce its Fuel Cell Electric Vehicles in ridesharing. This introduction will also motivate other services to acquire electric cars.

Mobility as a Service

The apparatus for smart transportation system is almost complete. Vehicles offer an adequate amount of connectivity and autonomy. Electric vehicles are already commercialized since long. Now, the ridesharing and commuting companies are waiting for implementation of a comprehensive framework which regulates a network of mobility. A shared network of transportation with mutual control center will emerge soon.

Analysts expect that some cities may feature a limited version of shared Mobility as a Service before 2019 concludes. Governments are welcoming the recent startups as well as established companies to start shared mobility in businesses’ capacity.

In the long run, shared mobility will also include drone taxi. The air transportation industry trends indicate that 2019 and a couple of subsequent years may not see a flying taxi. Nevertheless, they are inevitably going to extend MaaS in the upcoming decades.

Future trends in transportation industry – particularly the ones in 2019 – indicate some drastic changes. The major shareholders in the industry are already preparing to implement one or more of these trends. However, the probability of success for startups is remarkably high due to the demand for these services.

Move ahead of your competitors by incorporating one of these futuristic technologies. Start your free trial with CabStartup today to customize our framework to your business needs.

Radio Taxi in Era of Ridesharing and Public Transit